This is the story about a mare who was missing the tip of her right front coffin bone. She is now completely sound and under saddle. She showed everyone what is possible, if only given half a chance. Traditional hoof care was unable  to heal her hoof. The remaining option was was  trying to rehabilitate her hoof barefoot…..

Her history is  sketchy. We were never able to exactly piece together how long she has had hoof issues, but it was at least  for a couple of years and she’s also had some foals along the way. We got a hold of an old photo of her, in which the right front looked rather normal. It suggests,  that the trouble with the right front was man made. All we know for certain is that she suffered from horse care professional ignorance for some time.

She is left side dominant which means she loads her left front hoof more , making it wider and flatter. Since the right front is loaded less, it tends to grow more upright. This is often referred to as high/low syndrome and is  unfortunately still too often incorrectly addressed through trimming.   It is the primary reason why her right front hoof became this bad. 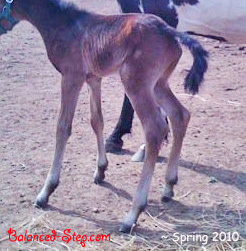 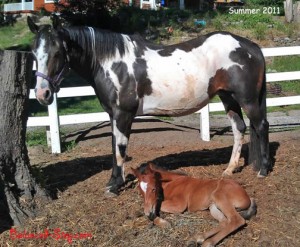 Video of her walking before shoe removal Dec 2011. 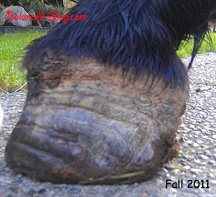 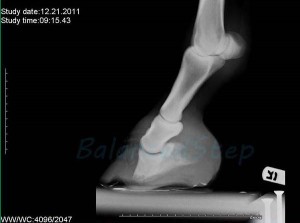 Her rehabilitation started in Dec 2011. The x-ray of her right front looked pretty discouraging. All we were hoping at the time was to try the best we can and make her as comfortable as possible. She also had a big hole in the sole at the toe from an old abscess blowout.

We addressed diet and started to re-establish correct hoof balance and supported what she wanted it to grow around the altered coffin bone. She slowly and steadily began to improve, but remained slightly lame. She kept stepping short with the right front leg, despite foreleg stretching to help he regain normal range of motion.

Then, one day in late summer 2012, her owner took the other horse away for a short trailer ride and she literally RAN herself sound! The short stepping essentially developed from compensation for the hoof  problem she had, but at the same time it also created bad muscle memory, which altered her right front leg movement. It looked like lameness, yet it was not. It took her frantic running to break through this and showed us, how much bad muscle memory CAN influence rehabilitation!

After that, we never looked back. She had a few minor set backs due to abscessing, but she essentially remained sound and has been under saddle since late spring 2013 and is doing great. Video of her walking in Nov 2012. 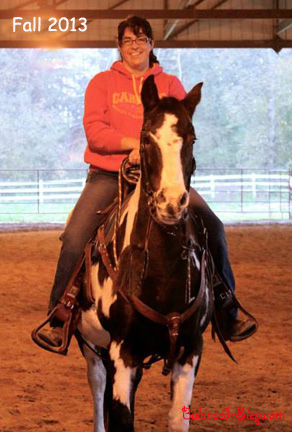 Destiny showed us what was possible with the right approach and her owner’s dedication. This mare got ALL the support she needed to become well, including bodywork sessions .  Without this strong support, she probably would have never made it. It is pretty certain, that most horse care professionals would have recommended to put her down.

One cannot say something is not possible until it has been thoroughly tried, as this story shows so well! Never give up as long as there’s hope! This horse has an exceptional human taking care of her. Fate brought us together to help a mare named Destiny.  It is  what miracles are made of!

This is one very lucky mare 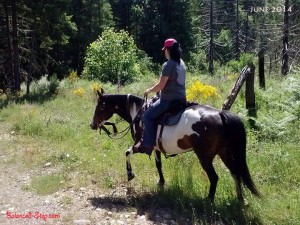